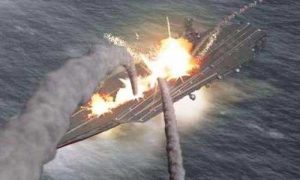 After decades of rapid innovation, the end of the Cold War and the subsequent Global War on Terror all but halted anti-ship missile development in the West. A focus on land operations in the Middle East and Central Asia sent Western navies struggling for relevance.

As a result, navies adopted an emphasis towards supporting land forces and operating in the littoral zone. For the most part, ship to ship warfare was reduced to a 9,000-ton destroyer confronting a 2-ton pirate skiff.

As rising tensions with China and Russia make clear: ship-to-ship naval warfare is back. And with it, the need to reach out and sink enemy ships.

A new generation of anti-ship missiles (ASMs) are on the horizon. Stealthy, supersonic and autonomous, these missiles are adept at evading defenses and hunting individual ships. Let’s look at some of the more interesting ASMs, both deployed and in development. 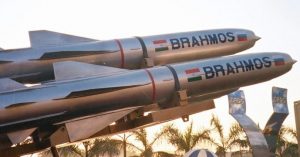 Named after the Brahmaputra and Moscow Rivers, the Brahmos anti-ship missile is a joint Indian-Russian program. Developed through the 1990s and early 2000s, Brahmos is one of the few anti-ship missiles built during this time. It is currently in service with the Indian Armed Forces.

Brahmos is the fastest low-altitude missile in the world. The missile has two stages: the first, consisting of a solid-fuel rocket, accelerates Brahmos to supersonic speeds. The second stage, a liquid-fueled ramjet, accelerates it to Mach 2.8. The missile reportedly flies as low 10 meters above wavetops, making it what’s known as a “sea skimmer”. It has a range of about 290 kilometers.

The missile is extremely versatile, capable of being carried by surface ships, land-based anti-ship missile batteries, and aircraft such as the Indian Air Force’s Su-30MK1. The air-launched version has a longer range of 500 kilometers. A submarine-based version is under consideration but has not been developed due to lack of interest.

Brahmos packs a considerable punch: land and ship-based versions are armed with a 200 kilogram warhead, while the aircraft version has a 300 kilogram warhead. Even without a warhead, at Mach 2.8 Brahmos would impart tremendous kinetic energy on its target.

Brahmos uses its high speed, stealthy design, and sea-skimming capability to evade enemy air defenses. The missile’s speed of Mach 2.8 translates to 952 meters per second. Assuming the defender’s radar is mounted at a height of 20 meters, Brahmos will be detected at a range of 27 kilometers. This leaves the defender with just 28 seconds to track, illuminate and shoot down Brahmos before it impacts the ship. 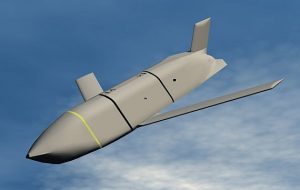 The U.S. Navy needs a new anti-ship missile. The current missile, Harpoon, was introduced in 1977. One of the best ASMs of the Cold War, Harpoon has aged into a mediocre missile unable to incorporate the latest technological advances.

The Long-Range Anti-Ship Missile, or LRASM, is a leading candidate to replace it. LRASM is a variant of the U.S. Air Force’s JASSM-ER cruise missile and shares many of its design features. Built by Lockheed Martin, JASSM-ER is jam-resistant and stealthy, with a range of 500 miles. JASSM-ER is designed to autonomously detect and attack targets based on an uploaded profile. It can deliver a 1,000 pound penetrating warhead to within three meters of the target, and is capable of being carried by most U.S. Air Force strike aircraft.

LRASM takes a different tack from missiles such as Brahmos. Instead of achieving high Mach numbers to make the missile more survivable against air defense threats, the subsonic LRASM uses stealth and autonomous decision-making to evade shipboard defenses. LRASM will identify high value targets on its own and home in on them.

LRASM should be expected to have a range similar to JASSM-ER. Compared to the existing Harpoon’s 67 miles, LRASM’s estimated 500 mile range will considerably enlarge the engagement range of the U.S. Navy’s air and ship platforms.

Unlike Harpoon, LRASM fits in both the Mk. 41 vertical launch system silos of the Ticonderoga-class cruisers and Burke destroyers and the Mk. 57 silos on the new Zumwalt-class destroyers. This will allow individual ships to carry many more anti-ship missiles than ever before, although this will impact the number of other missiles, such as the SM-6 surface-to-air missile and ASROC anti-submarine rockets, in the ship’s overall inventory. 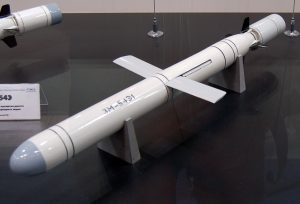 An anti-ship missile used by the Russian Navy, Club is actually a family of weapons sharing the same airframe. It is a versatile weapons system with variants capable of anti-ship (3M-54E1), land attack, and anti-submarine missions. Club has been exported to Algeria, China, and India.

Club has a solid-fueled first stage, which clears the missile of the launcher and boosts it to cruising altitude. After the first stage burns out, the missile’s turbofan engine kicks in. The latest anti-ship version, 3M-54E1, is directed to the target by an active radar seeker, GLONASS global positioning system targeting, and internal navigation systems. The 3M-54E1’s warhead weighs 881 pounds.

Technically a cruise missile, 3M-54E1 typically cruises at 0.8 Mach at an altitude of 10-15 meters. Some versions accelerate to 2.9 Mach supersonic flight during the terminal stage shorten the reaction time of enemy anti-missile defenses.

The maximum range of the 3M-54E1 is 300 kilometers, or 186 miles. It’s surely a coincidence that the missile’s range is the maximum allowable for cruise missiles under the Missile Technology Control Regime. MCTR is a nonproliferation agreement designed to limit the range of nuclear-capable missiles, to which Russia is a signatory.

Developer Concern Morinformsystem-Agat JSC caused a stir in 2010 when it announced Club K, a version that is camouflaged as a standard 40-foot shipping t container. The launcher, which can be carried by container ship, flatbed train car or truck, carries four missiles. It was never fully explained why any legitimate military would want weapon system camouflaged as a staple of global commerce. The launcher sparked fears that rogue states such as Iran (which subsequently announced interest) and terrorists could use it to hide missiles in plain sight. 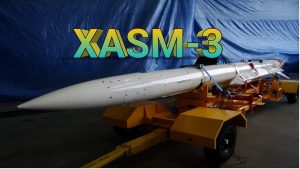 Japan’s strictly defensive military doctrine has driven a requirement for smaller ASMs to arm ships, aircraft and ground batteries. Japan has designed and produced two generations of anti-ship missiles fitting this profile, but the third generation will likely be a radical departure from past designs.

XASM-3 is an anti-ship missile currently under joint development by the Government of Japan’s Technical Research and Development Institute and Mitsubishi Heavy Industries (MHI). Although relatively little is known about the missile at this point, if put into production it will represent a considerable leap over the Japan Self Defense Forces’ existing capabilities.

XASM-3 has both active and passive integrated seekers. The missile weighs 1,900 pounds, with warhead size currently unknown. It is expected to have a range of 120+ miles.

The missile will be carried by Japan’s indigenous F-2 fighter. Other possible carriers are the Kawasaki P-1 maritime patrol aircraft and Japan’s F-35A fighters. XASM-3 will most likely not fit inside the internal weapons bay of the F-35 and would have to be carried externally, making the F-35 easier to detect.

Development of the XASM-3 began in 2002, and is expected to end in 2016 — six years overdue. At that point, MHI will need to decide if it wants to create a production missile. Should XASM-3 go into production, it’s possible it will be cleared for export to friendly countries. 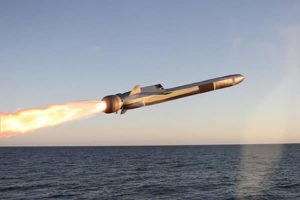 NSM utilizes a rocket booster for initial launch, after which it transits to a turbofan engine. The missile is a sea-skimmer, appearing to travel less than 10 meters above the wavetops in videos. Speed is unreported but likely high subsonic.

Kongsberg touts the missile as “fully passive,” meaning it does not use active sensors to track targets. NSM does not emit infrared or radar waves that could be detected by enemy ships. Weighing in at 410 kilograms, NSM is smaller than other missiles on this list. The missile has a range of 185 kilometers and carries a 125 kilogram warhead.

NSM is currently in service with the Norwegian Navy’s Skjold-class missile boats and Fritjof Nansen-class destroyers. NSM is also operated by the Polish Army as coastal artillery.

In October 2014, the U.S. Navy tested a Naval Strike Missile from the flight deck of the littoral combat ship USS Coronado. The test was a success, with a direct hit on a simulated target. The test was part of the Navy’s Foreign Competitive Testing Program and does not necessarily mean the Navy will acquire NSM.

A version of the Naval Strike Missile, the Joint Strike Missile, is currently under development. The JSM will be capable of both air to ground and anti-ship missions, and will fit the internal weapons bay of the F-35 Joint Strike Fighter. It will also fit a standard 533mm submarine torpedo tube. JSM is scheduled to become operational in 2023.