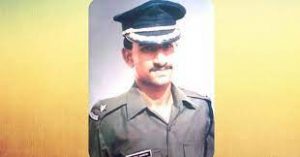 Second Lieutenant Rajeev Sandhu was heading an 8 km distant convoy comprising an open RCL (Recoilless Gun) jeep and a 1-ton truck on July 19, 1988. Surrounding the convoy was intense automatic and 40 mm Rocket Launcher fire from the right side of the route. Lalbuanga and Lance Naik Nandeshwar Das sat at the back. The automatic fire killed them instantly, while the 40 mm rocket impacted the front of the vehicle. The driver, Naik Rajkumar, was badly injured, his lower jaw blasted off, and thrown from the vehicle.

2nd Lt Rajeev Sandhu, co-driver, was struck by a missile, mutilating both legs and leaving him paralysed. he managed to climb out of the jeep with his 9 mm rifle and shoot close. One of the terrorists emerged from cover and approached the jeep to take up guns and ammo. Despite his broken legs and bullet-riddled torso, 2nd Lt Rajeev Sandhu raised his blood-soaked carbine and shot the terrorist. The terrorist was eventually recognised as a sector commander’s henchman. To collect a deceased militant’s corpse or take away weapons, terrorists continued to fire at 2nd Lt Rajeev Sandhu.

In 1 tonne, a collecting party leapt out and crept forward to fight the insurgents. Then 2nd Lt Rajeev Sandhu fired at the terrorists while being fatally wounded and bleeding profusely, said Naik Bhagirath. he ordered him to flank the insurgents and stop their escape. It was quick. Seeing the flanking manoeuvre, the militants retreated into the bush, leaving behind their dead corpses, guns, and ammo. Tagging along with fleeing insurgents but losing contact.

Meanwhile, Sepoy Kamkholum drove up to the jeep and lifted 2nd Lt Rajeev Sandhu, Naik Rajkumar, and the other fallen protection party colleagues. 2nd Lt Rajeev Sandhu, weakened by severe wounds and blood loss, ordered Naik Rajkumar and his protection party to be evacuated first; the weapons were collected and a detachment was left behind to maintain watch. 2nd Lt Rajeev Sandhu acted with bravery, dedication, professionalism, and selflessness. Due to excessive blood loss, he fell into a coma and died while being evacuated by helicopter. He died in action and was posthumously awarded the Maha Vir Chakra on March 26, 1990.