Greenjobs will be one of the fastest employment generating industry in India by 2025.

India ranks amongst the top 10 countries for production of renewable energy through solar, wind and biomass.

Though most countries are making efforts to move towards a low-carbon economy, six of them – China, Brazil, the United States, India, Germany and Japan – have created the lion’s share of greenjobs globally in the renewable energy sector at over 70%.

Contrary to the fears of US President Donald Trump, climate protection efforts needn’t eat jobs after all. The International Labour Organization (ILO), in its annual flagship report on the global job market, has noted that achieving the Paris Agreement’s 2 degrees Celsius goal will result in a net increase of 18 million jobs across the globe by 2030.

The “World Employment And Social Outlook 2018—Greening With Jobs” report also notes that more than 300,000 workers will be employed in the solar and wind energy sectors to meet the Narendra Modi government’s ambitious goal of generating 175 gigawatts (GW) of electricity from renewable resources by 2022. 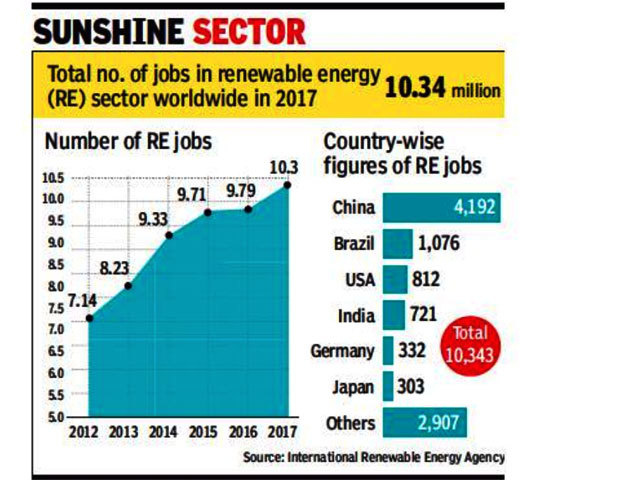 Biofuels, hydro-power (both small and large) and wind are the other three segments in the RE sector which employ maximum number of people across the globe. With China and India moving fast towards solar and wind, 60% of all renewable energy jobs are in Asia.

The initiative of ‘Skill India’ under the Pradhan Mantri Kaushal Vikas Yojana (PMKVY) by the Central government has given rise to a hope that this challenge will be addressed.

The enormity of this challenge is going to increase in the backdrop of an expected addition of 12 million people to the workforce every year in India.

This establishes the need for creating both jobs and skill within the Indian economy to address future developmental goals.

The question is to identify the intervention sectors where skilled and unskilled job creation can happen to address the long term goal through a green growth and development path.

These sectors have a huge potential for skilled job creation, and thus policy makers need to focus on them. Investment and targeted intervention can create multiplier impact on the whole economy.